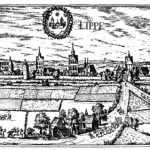 Anton Praetorius was born in 1560 in Lippstadt / Westphalia in Germany. He studied theology and became principal of the humanistic Latin school in Kamen/ Westphalia. Here Praetorius got married, but he lost his wife Maria by the plague. 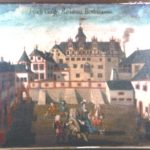 In 1597 he was appointed as protestant pastor to the Earl of Büdingen/ Ysenburg (near Frankfurt / Main) and had to witness the torture of 4 women accused of witchcraft. 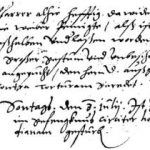 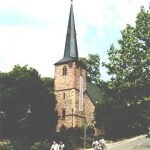 In his new parochy in Laudenbach/ Bergstrasse (near Heidelberg) he wrote the book „Gründlicher Bericht über Zauberey und Zauberer“ [Thorough Report about Witchcraft and Witches] to protest against torture and the prosecution of witches. At first he published the book in 1598 under an assumed name („Johannes Scultetus“). In 1602 he dared to publish it under his own name. The book was published again in 1613 and postumously in 1629. Praetorius died in 1613. 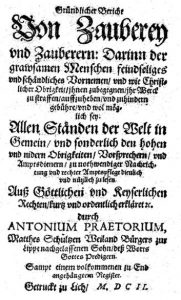 Contents:
Being the first calvinistic pastor of the parochy of the wine producing community of Dittelsheim Anton Praetorius visited nearby Heidelberg, the centre of Calvin´s theology in Germany. Impressed by the huge wine barrel in the Heidelberg castle he wrote a poem in 1595 praising the barrel as an apparent proof for the superiority of the calvinistic belief: Image Vas Heidelbergense (Poem on the 1. Great Wine Barrel in the Castle of Heidelberg).

1. Much has been written about the origins of witchcraft and about the impact of the book malleus maleficarum (1487) on the persecution of witches. It is not widely known, though, that persecution of witches took place in protestant as well as in catholic areas in Middle Europe. The reformers of the Church Luther and Calvin propagated this persecution according to the words of the bible Exodus 22.18: „Thou shalt not suffer a witch to live“. Sermons were held calling for the hunting down of witches.

But it was not only the Church which demanded trials against witches. At that time there was a widely accepted accordance (??) agreement between all legal and social institutions and the common people about the necessity of persecuting and torturing devil worshippers as observed in the contemporary witness of Loeher (in Rheinbach near Bonn 1640).

2. Individual Christians at that time protested against the persecution (Weyer, Praetorius, Spee, Meyfart). Over the centuries the protests of the Protestants have been forgotten, while the testimony of the catholic Spee has been kept alive.

3. During the period of the Enlightenment it was one of the main aims of historians to make a contribution to putting an end to the controversy regarding the trials.??? Blame for the persecution of witches was put on the Churches.

The Pope mentioned neither the words „heretics“ and „witches“ nor the victims of the persecutions. Therefore the Mea Culpa has rather been a disappointment for many who had hoped for a clear word of apology for the involvement of the Church in the persecution of minorities and of witches.

Hartmut Hegeler was born in 1946. He is pastor in the Church District of Unna in the Church of Westphalia/ Germany. Since 1982 he is teaching the subject of religion in the Maerkische Vocational Training College in Unna.